During the TRR 266 Annual Conference on 28 & 29 November 2019 the attending members could vote for the best conference paper (“Best TRR 266 Accounting for Transparency Conference Paper Award”). Surprisingly, after counting votes it turned out there was not just one winner, but 3 papers had equally received the most votes. The awarded researchers and papers were: 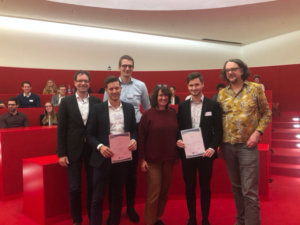 TRR 266‘s main locations are Paderborn University (Coordinating University), HU Berlin, and University of Mannheim. All three locations have been centers for accounting and tax research for many years. They are joined by researchers from LMU Munich, Frankfurt School of Finance and Management, WHU – Otto Beisheim School of Management, ESMT Berlin, Goethe University Frankfurt and Carl von Ossietzky University Oldenburg who share the same research agenda.