A team of researchers from TRR 266 has published an Executive Summary on their new data on the main determinants of tax complexity according to German tax authorities. Caren Sureth-Sloane and Adrian Schipp (Paderborn University), together with Tobias Bornemann (Vienna University of Economics and Business), surveyed 317 tax officers, tax auditors and other tax experts of the German revenue service at the country or state level. The key findings are summarized below. 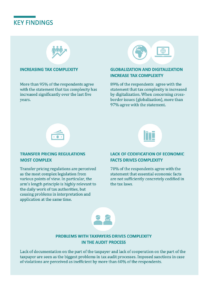 „The aim of the study is to identify the main determinants of tax complexity in international business taxation according to officials of the German revenue service. The identification of complexity drivers in international business taxation is interesting because they can provide important guidance for future tax law reforms and tax frameworks. This is particularly true for the challenges posed by the ongoing digitalization and demographic developments that the tax authorities will face in the future“, explains Sureth-Sloane. Using a survey, the researchers identified those areas which – according to tax administration officials – are considered to be particularly complex in the tax law and in the legislative process, guidance, mutual agreement procedures, audits and appeal procedures of corporate income taxes.

The survey study builds on and extends the Global MNC Tax Complexity Survey. The survey addresses tax authorities in Germany in dealing with cross-border issues in income and corporate taxation. This approach allowed the researchers to add a further perspective to the understanding of tax complexity in general. it helps to draw a more complete picture of tax complexity in international business taxation.