Researchers from LMU Munich and Paderborn University present an Executive Summary of first results of the second Global MNC Tax Complexity Survey. The Executive Summary of the survey seeks to provide an overview of tax complexity as faced by multinational corporations (MNCs) in 2018 and the changes in tax complexity from 2016 to 2018 in OECD countries, taking into account the results of the 2016 Global MNC Tax Complexity Survey. The key findings are summarized below. 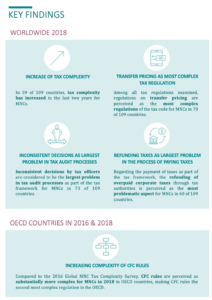 The research is led by Prof. Deborah Schanz (LMU Munich) and Prof. Caren Sureth-Sloane (Paderborn University). They explain: “The 2016 Global MNC Tax Complexity Survey enabled us to shed light on the various drivers of tax complexity in different countries and to construct the Tax Complexity Index. Through the second survey we are now able to examine tax complexity over time. Over the past two years, many developments have affected tax systems around the world. These included not only large tax reforms, such as in the United States, but also the progressing implementation of the action points of the project on base erosion and profit shifting (BEPS). Furthermore, digitalization appeared to be an important topic regarding both tax regulation and the administration of taxes. Overall, we expect that tax complexity has been affected by these changes. By investigating the changes in OECD countries, we aim to detect some initial trends towards the further development of tax systems worldwide.”

You can find the Tax Complexity Index, and more information about the project, at:
www.taxcomplexity.org