Accounting rules are a popular means for bank regulators around the world to practice regulatory forbearance during a financial crisis. During the COVID-19 pandemic, for example, the US government and the European Central Bank (ECB) decided to relax accounting rules to increase banks’ capital on paper in an attempt to restore financial stability. But the effects of these measures are not obvious and rather controversial. Can a relaxation of accounting rules really help banks survive in times of crisis? Ulf Brüggemann, Jannis Bischof and Holger Daske address this question in their recently published study. They examine the suspension of the fair value measurement during the financial crisis of 2008 and offer conclusions for current and future financial crises.

By September 2008 at the latest, it was clear: the US subprime mortgage crisis had turned into a global banking and financial crisis. The bankruptcy of the US investment bank Lehman Brothers became a symbol for the critical situation of the financial sector: banks had suffered heavy losses that eroded their equity capital and brought many of them to the brink of bankruptcy. The financial stability was severely threatened, a full-fleshed recession across most of the major economies in the world was imminent. A turning point for political action: governments and regulators intervened with direct injections of capital and liquidity, guarantees for savings deposits, and the purchase of troubled bank assets.

In October 2008, at the peak of these government interventions, politicians and regulators turned to accounting regulation as another means of aid for the ailing financial industry. The International Accounting Standards Board (IASB), under immense political pressure, relaxed accounting rules by introducing the option to reclassify financial assets out of fair value categories and into amortized cost categories. Fair value accounting requires banks to record their assets and liabilities at current market prices – recognizing all gains and losses immediately in the (comprehensive) income statement. What had been introduced to increase the transparency of financial reporting, bears the risk of having to realize high losses in times of crisis. The reclassification option allowed banks to temporarily forgo the recognition of fair value losses and the corresponding decrease in equity capital.

Treatment with potential side effects

Compared to capital injections and asset sales, the reclassification of assets out of fair value in times of falling asset prices has two main advantages: It directly increases equity capital without immediate transaction costs that a bank would incur when issuing the same amount of equity to the public or a government. And it also avoids the transfer of control rights and a dilution of the position of existing shareholders. But accounting options are no panacea, they also have two critical side effects.

First, asset reclassifications reduce transparency because the fair value losses only reflect the actual condition of a bank’s investments and, thus, offers insights into the bank’s true risk exposure. The use of such an option frequently evokes negative market reactions, because it plausibly signals that managers are expecting additional future losses.

Second, the capability of this option to provide a sufficient bank recapitalization is limited. The limitation concerns of the timing. A reclassification only postpones the recognition of losses – and thus only delays capital reductions. This is particularly critical during the build-up of a crisis when the loss avoidance also reduces management incentives to take early corrective actions and reduce the actual risk exposure. The limitation also concerns the magnitude of the recapitalization because only very specific assets are eligible for reclassifications, with some of these assets not even being available to some banks. And, eventually, the potential real effects have natural limits as the reclassification of assets only affects accounting numbers and does not generate any fresh liquidity – which is what many banks would have needed most in late 2008.

No matter how vehemently the relaxation of fair value accounting was demanded in 2008, its effect is controversial. Whether and to what extent the reclassification option in particular – and a relaxation of accounting rules in general – can help banks survive the crisis is not obvious and requires an in-depth analysis. This is all the more important as regulators and policy-makers frequently turn to interventions in accounting to overcome financial crises. During the Corona crisis, for example, the ECB decided not to enforce the strict recognition of expected credit losses in Europe and the US government postponed the introduction of the CECL standard for expected credit losses.

We therefore examine the relaxation of fair value accounting rules in 2008 in detail – its rank in the pecking order of capital measures, its impact on the increase in equity capital as well as its short-term and long-term effects. Our study compares the reclassification of assets with other capital measures, such as capital injections from government support programs. Based on our study, we can draw conclusions for current and future crises – and provide regulators and policy-makers with evidence-based guidance for crisis management: 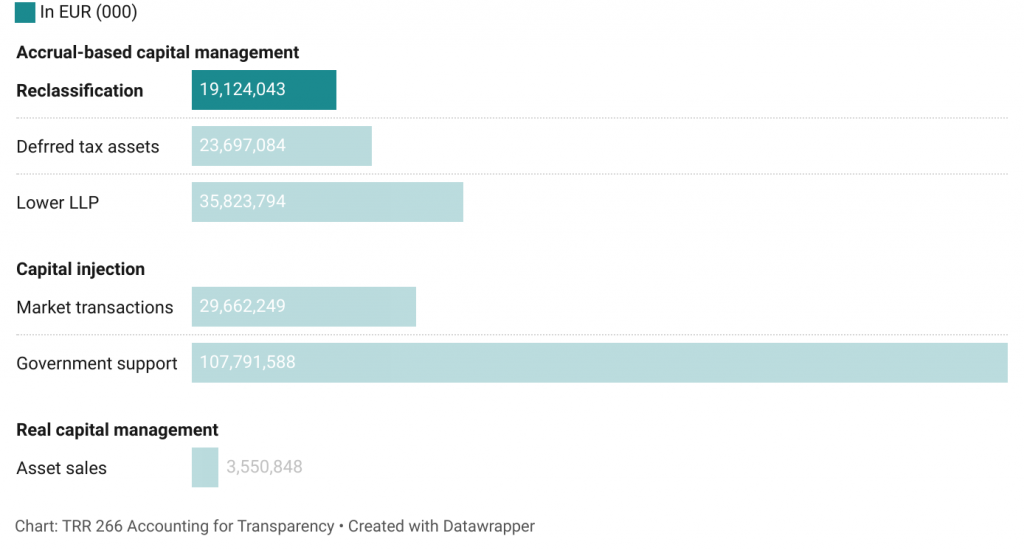 Moreover, asset reclassifications do not substitute but rather complement other capital measures, especially injections through market transactions, asset sales, and deferred tax assets. However, if these measures already suffice to build an adequate capital buffer, there is significantly less recourse to asset reclassifications. This pattern reveals that managers obviously prefer other recapitalization options over asset reclassifications. Our results also suggest that once a bank decides to rely on government support, the sheer magnitude of the injected capital makes all other recapitalization measures much less relevant.

At best, the suspension of fair value measurement provides temporary relief for distressed banks and helps reduce transaction costs of raising capital or transferring control rights. But the benefits from a delay of accounting losses are not persistent. Asset reclassifications come with significant costs, which we document for the first time.

First, market participants interpret the decision to reclassify assets as a signal of financial distress. This counteracts and significantly mutes or even reverses positive market reactions to short-term relief. In the narrow windows around the regulatory announcement and the banks’ announcements to use the reclassification option, significantly negative stock market reactions emerge, unless these announcements are accompanied by information on complementary measures such as guarantees or government bailouts. 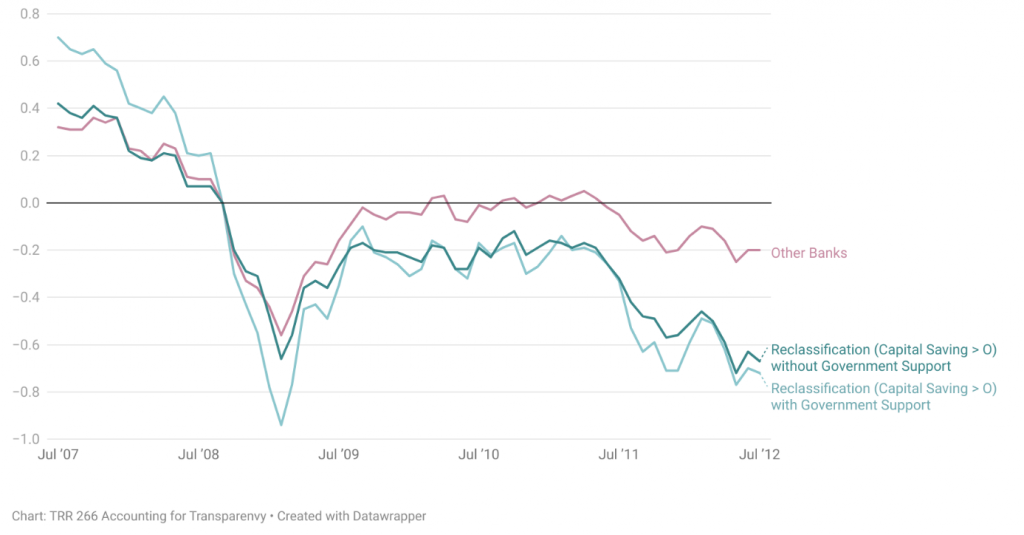 Second, banks that opt for asset reclassification are also in a systematically worse financial situation in the following years than other banks, especially if they do not receive additional government support. They have lower capital buffers in stress scenarios, their lower credit ratings reflect a higher risk of default and they experience a slower recovery of their stock price. Thus, hindsight shows that market participants‘ early scepticism was justified by the weak ex-post performance of reclassifying banks.

Overall then, our findings only justify the intervention in accounting regulation in a banking crisis when regulators concurrently implement multiple rescue measures as a circuit breaker to a downward spiral and enforce real corrective actions. Against this background, it appears highly questionable whether the regulatory responses to the COVID-19 crisis help stabilize bank capital in the long run. The ECB’s decision not to enforce the strict recognition of expected credit losses in Europe and the delayed introduction of CECL standards in the US resemble the introduction of the reclassification option during the financial crisis 2008 as they also delay loss recognition and help avoid a decrease in bank capital on paper. Our results suggest that these interventions mitigated incentives for banks to take corrective actions early during the crisis.

To cite this blog:

Jannis Bischof is Professor of Accounting at University of Mannheim. His research addresses the role of disclosure and transparency in the financial sector and other settings, the regulation of financial institutions, and managerial discretion in reporting decisions. His research is published in journals such as Journal of Accounting Research, Journal of Business, Finance & Accounting, or Schmalenbach Business Review. He is Research Associate at the Leibniz Institute für Financial Research (SAFE) and is member of the EFRAG’s Financial Instruments Working Group. He is member of the Editorial Board of several international journals (Accounting and Business Research, Business Research, European Accounting Review, Journal of Business Economics).

Holger Daske is Professor for Accounting and Capital Markets at University of Mannheim. His research interests include capital markets and the intersection of Accounting and Finance. Current work analyzes the economic consequences of the implementation of International Financial Reporting Standards (IFRS) on capital markets worldwide and the impact of firms reporting incentives on actual financial reporting quality. His research is published in leading journals such as the Journal of Accounting Research, the Journal of Business Finance & Accounting, Abacus, Accounting & Business Research and the German Zeitschrift für betriebswirtschaftliche Forschung (ZfbF). Additionally, he is member of the working group “finance accounting” of the Schmalenbach-Gesellschaft and member of the IFRS Advisory Council of the IFRS Foundation.

Asset reclassifications and bank recapitalization during the financial crisis

A01: Determinants of Mandatory Disclosure

A08: Standardization of Accounting Language in Financial Disclosures